This year Christoph, Jan and I arrived a little earlier to Antwerp to do some sightseeing before the conference… it was really worth it.
The WiFi was excellent which deserves to be mentioned, catering was rather poor and the queues were long which was not really surprising.
My plan for this years Devoxx was to skip JavaFX and Android sessions and focus mainly on server side and core Java talks mixed with some JavaScript Application frameworks. It turned out to be a good plan. No poor talks this year.

I’m really happy that Java catches up a bit with other JVM languages. The talk from Arun Gupta about WebSockets in Java 7 and the one from Brian Goetz about Lambdas (Java 8) were among the very good ones. I will definitely have a closer lock again at WebSockets. The internet of things sessions were a bit disappointing. I got the impression that IoT is currently just a shortcut for “a RaspberryPI used to do some toy stuff”. What else? Vert.x 2.0, Hazelcast, Hadoop, a lot of very interesting stuff. I hope to find some time to play around with Hazelcast (maybe with a RaspberryPI cluster :-) and Vert.x. The overall best session was the quickie “Patterns, Shmatterns” from Chet Haase. Very informative and essential for every serious programmer ;-)

Wow, what a ride. 17 sessions all together with an average personal rank of 3.3 stars. It has been a really good conference and I hope to have the chance to come back next year…

I’d like to to finish my Devoxx 2013 series with some statistics. My personal feeling was that the Devoxx was clearly dominated by talks from the main sponsors: Google, Oracle, RedHat, Microsoft. Their talks where great, but it seems a little unfair that main sponsors get so many slots, while many other good applications have been declined.

So I did some statistics to find out if my personal impression was correct. Basis was the speaker list on http://www.devoxx.be/dv13-speakers.html, which I processed with regular expressions. If a talk had multiple speakers, I counted that as multiple talks. If a company was named differently for different speakers (like “Google”, “Google Inc”, “Google France”) that may have been counted as different companies.

The number of talks (including BOFs, University talks, Quick talks, etc) for the main sponsors was as follows:

That sums up to 53 talks. Given that there were 204 talks in total, this is only 1/4th of the available slots. There was a total of ca 130 companies sending speakers to Devoxx, about 100 of them were there for a single talk only.

To sum things up: My personal feeling is not correct. The vast majority of the talks was by companies that are not main sponsors. So there must be another reason why I remember mostly the main sponsor’s talks. Maybe it’s because they had really great ones.

This was my 4th Devoxx conference in a row so I call myself some kind of
Devoxx veteran. The conference seemed to be more crowded than ever so
standing in line waiting for something was the usual business. I never
had a chance to grab one of the Belgian waffles.

But waiting was definitely worth it as the conference talks were great
and gave me a lot of new ideas.

Especially Vert.x (again), Hazelcast, WebSockets JEE7 and Dart were the
highlight talks for me this year. Vert.x has already been one of my
favorites in 2012, so this is something I hope to try out in the near
future in some project. Also Groovy for writing unit tests is something
I want to give a try in my next projects.

To sum up Devoxx ‘13 was great and hopefully next year I can extend my
conference veteran status.

Marios was busy and did our single last review for the fith day:

On the last day was a talk about Invokedynamic finally. I am very interested in
this new Java 7 Feature, because it is an important bytecode change (JSR 292)
and will be used to implement Lambdas in Java 8. So I was very happy about this talk.

The speaker Remi Forax is Assistant Professor at Paris-East Marne-la-Vallée and
exceptionally no speaker from one of the big companies which support Devoxx.
In the talk he presented his current work to implement JSR 292 in Androids Dalvik-VM.
The project can be found here

At first he introduced Invokedynamic by showing the corresponding Java-API
and then he was going straight into the implementation of Invokedynamic inside Dalivik.

One of difficulties at his work is, that the implementation has to be very performant. Per example the Method-Lookup must be lookfree because it will be called a lot of time. He also showed some performance comparisons.

A second difficulty is that Google does not care about the bugs they found in Dalvik, so they have to implement a lot of workarounds.

The talk was not as seasoned as one of Brian Goetz per example, but it had a lot of interesting stuff.

This was my first time at Devoxx and I liked it very much. We were in
a hotel near the big cinema where the conference was. In the morning we had
a nice walk along the port to the talks.

The first two days with the university talks were especially nice because
there were not so many people. From the third day the cinema
was pretty full. In my opinion the location was a little bit to small.
The catering was not tasty, too, but such things does not matter if the
talks were as good and they were.

I mostly like the really technical talks like the bytecode talk or the one
about microbenchmarking. But the other ones were good, too. Now I have complete
overview about the new technologies around the Java platform.

After the talks at the evening we had a nice time in Antwerp together too.

Especially I was happy that I stayed a bit longer in Brussels on Friday before the flight back
to Munich. It was the first time there and I really liked it. The city is really impressive and
I recommend everyone to visit it.

This year I did the full conference (as always), with focus on the geeky stuff. I leave Devoxx with the impression, that the “Internet of Things” (IoT), though still in its infancy, is starting to take off. A lot of cool ideas were presented like the Crazyflie Quadrocopter, how to hack a car’s OBDII connector or the Myo, a gesture input control based on measuring muscle electrical currents. However, nearly everything is still in a very early stage, not yet ready for the ‘real’ world. A lot of demos failed in one way or the other (the ‘Duke pad’ even twice ;-) but with regard to the last year there was enormous progress. I’m really curios what’s the state of the art next year and were all this will drift to.

My other highlights, in random order:

The organization was professional as always. And the lunch quality and the length of the queues were kept on a stable level ;-) That’s no problem for me as long as the quality of the presentation and the ‘newness’ factor is kept high. And I have to mention the WiFi, too, which had the best connectivity since the last years.

BTW, Google, thanks for the Sugru samples, they are really cool ;-)

This year was my first time at the DEVOXX and I had an exhausting but great time. The conference and the cinema, where it took place, was awesome. You listen to talks while sitting in comfortable seats in a very “geeky” atmosphere. I just liked it.

But after five days of listing to talks, unhealthy food and crowded rooms, I was glad to have the weekend for relaxing.

Most of the talks were pretty good and the three topics which stayed in my mind are AngularJS, Lambdas and Raspberry Pi. They were everywhere and I’m looking forward to use them in a real project or to just try out.

One thing I have to complain about is the missing Windows Phone App :-)

… and then the Devoxx Posse says good bye. See you next year ! 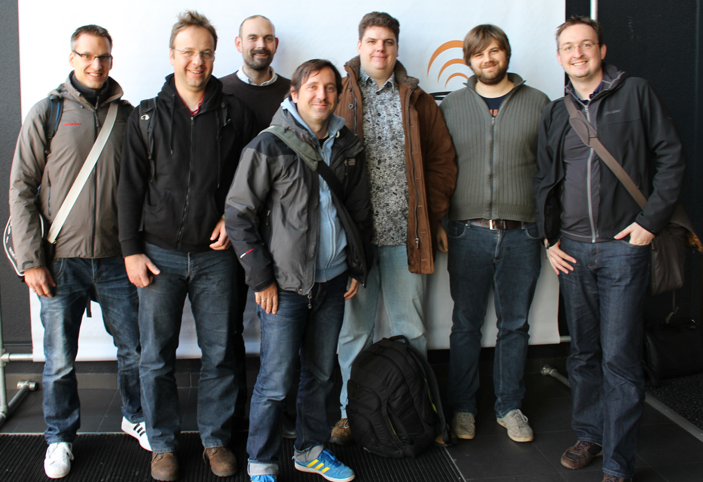