Imagine your’re working on a bigger feature in a complex piece of software. Your implementation is complete, all tests in scope turned green and you push your changes for integration testing. Then, some integration tests from a completely different module fail and you have no clue which change may have caused this. Now you start analyzing the issue. Probing your commits by hand would end up in a very tedious process for sure. Thankfully git can do all the work for you, while you enjoy a cup of coffee.

The high-level command git bisect allows you to automatically run a specified test procedure, while it’s crawling through your commit history to find the bad revision.

To do the hands-on part, the following setup is required on your local machine:

What is git bisect?

The official description of the git-bisect documentation states:
Use binary search to find the commit that introduced a bug.

So what does that mean?

Let’s say you have a bunch of commits, and you know that, at some point, your software was okay. Now, your software is broken, which means, that you introduced a bug somewhere during your development. What git bisect does is, it divides the revision graph into a good part and a bad part by testing specific commits chosen by a binary search. Based on the result of the tests, git navigates towards the broken commit. After a few iterations, git will be able to identify the revision that introduced the issue.

The workflow of git bisect consists of two major steps. At first, you have to specify a range of revisions, limited by a good and a bad revision. These revisions can be referenced as revision hash, tag or any other git revision selector. At second, the bisect process starts and git automatically performs a checkout of the first revision to test. After passing the result of the test to back to git, by executing git bisect good in case of a success or git bisect bad in case of a failure, the next revision will be chosen. The second step will be repeated until the first broken revision has been found. 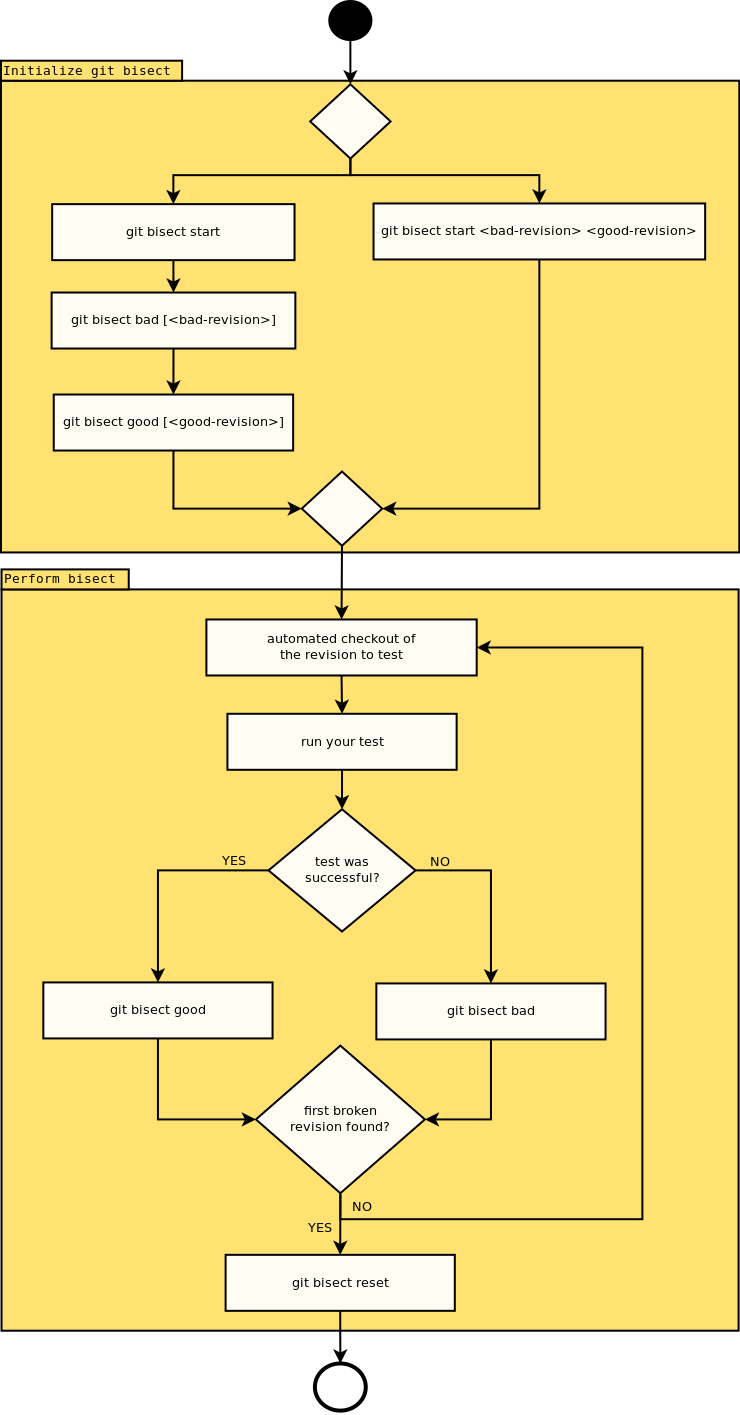 Now that you know about the idea and the workflow, let’s continue with the hands-on. At first, checkout the repository from GitHub containing the example project. As you can see, the repository contains three folders:
* cake-factory: A sample spring boot web service containing some issues to find
* simple-bisect: A reference how to manually use git-bisect <- This is what we’ll do now
* automated-bisect: A reference how to use automated bisect including a sample script

Now let’s try to build the cake-factory by executing

You’ll recognize, that the build was not successful, because of a failed Citrus integration test. Now, let’s find out, where we introduced the bug.

As shown in the workflow, we’ve to setup the bisect scenario first. Therefore we have to find a good and a bad revision to define the borders of the analysis. Both revisions are easy to find. The good revision is most likely the revision, you branched from. The bad revision is HEAD, due to the fact that your tests are failing now. Nevertheless, for our example we’ll use two prepared tags stable and broken from the repository.

Or if you want to use the shorter version:

Now, that your bisect has been started, git has chosen a commit to test and provides the commit message as well as an estimation of the required iterations.

By not later than now, you should have figured out a test strategy to identify the root cause of your problem. In our case a integration test failed. Therefore we’re concentrating our debugging efforts on integration tests. The setup of the cake-factory allows us to skip unit tests and start right away with the integration tests, by setting the property skip.unit.test=true.

In this revision, everything is okay and the build was successful. Now we have to report this result to git

Based on our reporting, git has chosen the next revision to check.

Now you have to repeat the testing and reporting procedure. After some iterations, you’ll find the following commit causing the problem.

Note the revision hash of the broken commit and don’t forget to close your bisect session.

If you look into the code of that revision, you’ll find out that the default cake, delivered by the cake services, has been changed to vanilla as stated in the commit message, but the integration test has not been adapted.

As you may have recognized, the manual execution of the bisect steps produces some overhead and is a repetitive task. This increases, if you work in more complex projects with multiple modules involved. Thankfully git bisect contains a sub command that allows us to execute a specific command or a scripted test procedure with automated reporting of the result. This does not only reduce the required amount of time but also the possibility of mistakes while repeating the steps by hand.

To report the result of the test to git, your command or script has to fulfill the following contract:
If the test was successful, the executed command delivers the return code 0, otherwise a return code other that 0 is returned.
Due to the fact that you just have to fulfill this contract, you could also do some more advanced testing logic using python, or even java. Nevertheless I would suggest to be pragmatic and keep the test simple.

Let us return to practice. If not already done during the previous section, please checkout the repository from GitHub containing the example project. In the “automated-bisect” folder, you’ll find a findBug.sh bash script, that contains the test procedure from the “Manual git bisect” section as code.

To execute the automated test now, just prepare a bisect environment and pass the script to git bisect run.

Alternatively, if you have a one line command as in findBug.sh, you could also pass the command directly to git bisect run as long as the passed command fulfills the contract.

When the process has been finished, git will show you the first bad commit as known from the manual part.

About git bisect and TDD

If you’re following the TDD life cycle to develop your software, you may have some troubles using git-bisect, because your software alternates between a erroneous and a functional sate from a software test perspective. As soon as you specified a new test, your software becomes unstable. If you would execute a simple mvn clean install in such a situation, git bisect would not find the revision containing the root cause of your problem, because it is confused by the failed builds caused by your TDD tests. This can also be shown with our cake-factory example, by removing skip.unit.tests=true from the maven instruction.

Now git bisect will react on every single unit test that is failing. This leads to a result as well, but it has nothing to do with the root cause of the issue we were looking for.

As you have seen in the section “About git bisect and TDD”, a test scenario which is not restrictive enough, returns misleading results. Therefore it’s important to create a test scenario, that suites your situation. Here are some bullet points that might help you avoiding pitfalls.

As you have seen, git bisect is a powerful tool to find broken commits within your git history. You’re able to define a range of revisions that will be checked automatically. If you’d like to learn more about git bisect, please visit the following links:
* git-bisect documentation
* Debugging with git

If you have any questions, feel free to email me at sven(dot)hettwer(at)consol(dot)de or contact me on twitter