This is the story, how I increased Nagios’ WAF by hooking up a Lava Lamp for notifying when the wood-burning stove needs to be inflamed.

The problem I’m trying to solve was quite simple. Since about 6 years I’m living in a so called “passive house”, a house with a very good isolation and very low energy consumption. One part of the concept is a so called 1000 l heat storage tank, which has three layers of water with different temperature levels. Energy comes in either from the roof via solar panels or by heating with an wood-burning stove. Except for the winter, the energy collected by the solar collectors is sufficient for taking a warm shower and everything else. However, in winter external heating with the stove when the temperature in the storage drops below 45 degrees celsius is necessary.

Since feeding the stove is a manual process, I monitor the temperature with Nagios in the heat storage and switch to a WARNING state when the temperature drops below 45 degrees celsius. In that case, a mail is sent and we have to seriously worry about a hot shower in the evening if not the stove is inflamed timely.

Although the temperature monitoring works fine, it’s always only me who reads the notification mails. My wife is completely ignorant about those mails. In fact, she even don’t want to receive such mails anymore, it’s just too annoying. Being not at home during most of the week, this doesn’t help much in timely heating the storage up again.

And that is where the story begins. 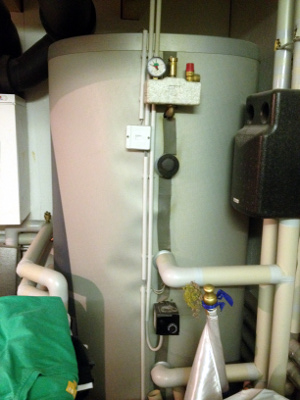 The hot water tank is a sophisticated mechanism for storing heat. Ours has a capacity of 1000 l and is layered with three temperature zones. There are two heat sources: One is the solar panel on our roofs and the other is a wood oven, which transfer part of the energy to this storage tank. Output is the warm water supply used mostly for shower and bath, and the heating, which is typically not that much used because we have a very good isolation. The storage tank is composed of three temperature zones: The top one is used for delivering heat. The middle one is connected to the wood-burning stove supplies heat to the storage, and the lowest is connected to the solar panel. This is not the place to explain the overall concept “passive house”, which has much more components, but the point for this blog is: If no sun is shining and the storage temperature drops below a certain threshold (45 degrees celsius in my case), you need to fire the oven in time if you want have a warm shower in the evening.

Our tank is produced by Sonnenkraft. Getting to the temperature from the outside is a bit difficult, and I had to analyze the Resol VBus protocol. Let me know, if you need some Perl modules for hacking around with it. 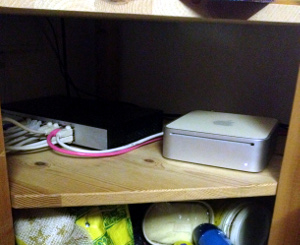 For monitoring and other purposes, I’ve re-activated a 2006er Mac Mini as a Linux Debian server, with the optical drive replaced with a 1 TB hard drive (adding up to 2 TB overall). The nice thing about this setup is, that you get a full blown server with storage, media server, nagios server, and, and …. for as less as 30 W power usage. Pro-tip: Don’t forget the DVI dongle if you want to run the Mac Mini headless ! The heat storage is connected via the VBus and an USB endpoint to the Mac mini, from where the temperature for each layer can be measured separately.

For monitoring purposes I use OMD and as UI of course Thruk, the best Nagios UI ever with a lot of hidden gems and totally reality ready. Give it a try if you haven’t yet.

As notification I relay on good old e-mail, and that’s fine for me. But, as already said, I needed to bring something more visual on the table. Heck, I needed a extreme feedback device, and that’s the rest of the story. 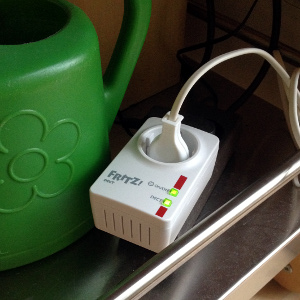 The AVM FRITZ!DECT 200 is an inexpensive (~ 50 EU) switchable plug which can be controlled via DECT. In order to connect to this plug you need an AVM router which supports AHA (the “AVM home automation”). Gerhard blogged quite a bit about this switchable plug, you can find a good introduction in our Meeting Minutes or in this blog (in german, though).

You can monitor the AVM FRITZ!DECT 200 with check_nwc_health which beside the switched state also measures the energy consumption and current power. But in our case, we don’t want to monitor it but use it as an endpoint for a Nagios notification handler, which switches the plug “on” in case of a problem and back to “off” on an recovery event.

Of course, you need an AVM router for controlling the Dect!200. A good choice is the FRITZ!Box 7390. Together with some mobile apps you can even switch the plug from you favourite pub ;-)

### Lava Lamp
The star of this story is the good old Lava Lamp, which comes directly from the seventies. I highly recommend to get your hands on an original Lava Lamp from Mathmos. Not only because it’s the original one, but because it also has a good ventilation for getting the heat away which is important for an unattended usage.

The lamp of choice is the Astro Baby for 70 EU in red-violet because it looks awesome and has a lower energy consumption than the bigger Astro (30 W instead of 40 W).

Lava lamps are nice visual alarms, because the grow slowly giving you an indication about the urgency of the temperature decrease. You shouldn’t run a Lava lamp longer than six hours at a strech, because then it would get too hot and bubbles start to diffuse.

So, that’s what I wanted to have:

Now that we introduced the actors, the heat storage is hooked up to Nagios and the Lava lamp and the FRITZ!DECT 200 switch and nicely in place and configured in your FRITZ!Box, some links are still missing, though:

All the code what follows is available from Github.

This is a simple perl module, wrapping around the brand new AHA HTTP protocol specification provided by AVM. It knows how to get the current switch state, how to turn on/off the switch and how to measure energy consumption and the current power. This module can be obtained from CPAN as simple as:

The usage is also quite easy and well documented. An example looks like

In addition to the modules for accessing AVM AHA switches, a script brings it all together. The script lava_lamp.pl can be found in the Github Repo as well.

It is used for two purposes: Once as a watch dog triggered every 20 minutes by cron. This ensures, that the Lamp only runs in defined time windows and that it gets switched off if it is running already for too long (remember, lava lamps should run only for at most six hours). And then is this script configured as a notification handler in Nagios which gets notified for problems and recovery.

The status is tracked in a lamp.status file (which contains not much more than a serialized Perl hash) and updated by the watchdog and the notification handler.

I.e. the following modes can be provided to the script via the --mode option:

In addition to the command line options, lava_lamp.pl can be customized by tweaking the configuration variables and include it with the option --config. What can be tweaked can be seen at the top of this example script:

lava_lamp.pl should be added to a cron jon in order to run regulary. Simply put the following file to /etc/cron.d (or if, using OMD in ~omduser/etc/cron.d with an omd reload cron afterwards)

In this example, the watchdog runs every 10 minutes to check for the Lava lamp constraints.

If the script is used as a Nagios notification handler, add this command to you nagios configuration and use this at a notification handler for a contact. I recommend to use a dedicated “Lava Lamp” contact which then is configured for one service only (in my case the monitor for water temperature, however you could use it also for a business process service, too).

Alternatively, this script can be used of course also e.g. with Jenkins in order to easily connect the Lava Lamp as an extreme feedback device.

The installation is quite fresh now, and it seems to work well. The scripts provided can be easily adapted for special needs. Also, it is not restricted to speak to the AVM home automation only. All device specific entries can be found at the end of the script and can be adapted e.g. for calling a different ethernet plug like the NETIO230B-SI. Only a handful methods must be implemented (open_lamp, close_lamp, is_on, on, off) for using an alternate plug switching API.

Hopefully you got some inspiration for your own Lava Lamp Feedback Device, maybe not only for Nagios but for other automation system as well. Why not hooking up the script into Jenkins as feedback device you continuos builds ? Or connecting the Lamp to Nagios business processes and putting a line of lamps into your boss’ office ? The sky is the limit ;-)

But for me, the most important thing is, that Tanja is happy now …. ;-)