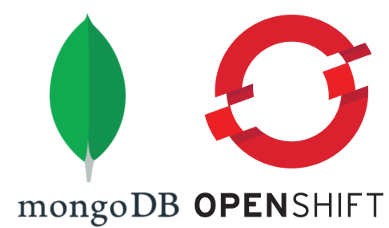 So here is another one of our series Installing Blahblahblah on OpenShift. This time it is about getting MongoDB to run on OpenShift - the way recommended and promoted by the MongoDB guys. The whole setup is still in beta stage as indicated on these two entries in Red Hat’s container image catalog. You can get your MongoDB instance up and running on OpenShift. But most of the required steps have to be performed on the command line, contrary to the impression given by MongoDB, Inc that once you get the MongoDB Operations Manager up and running everything can be achieved via this tool’s GUI. Some operations in the Operations Manager simply do not work (yet) on OpenShift.

When I last had to work with MongoDB back in 2015 and 2016 (version 3.0 and 3.2) installing this NoSQL database was a matter of running a single installer. You got a standalone instance nearly instantly that was ready for use. The downside was that tens of thousands of MongoDB installations where accessible via the Internet with default passwords. Since then a lot has changed. MongoDB has become far more enterprise-ish. Your MongoDB deployments are now administered with the MongoDB Operations Manager that takes advantage of hosts running the MongoDB Agent. In the Kubernetes / OpenShift world for getting a running Operations Manager and a bunch of pods equipped with the MongoDB Agent requires dealing with the MongoDB Enterprise Operator for Kubernetes.

I got most of my input from the following documentations:

Initially I had also included the blog article Introducing the MongoDB Enterprise Operator for Kubernetes to this list. But be warned. It’s pretty messed up. You won’t get far with it on its own.

Be careful not to get confused as some notions exist in the OpenShift world and the MongoDB world with distinct meanings: cluster, replica set, project, deployment.

The documentation found in the GitHub project of the MongoDB Enterprise Operator about installing the operator on OpenShift turned out to be not very accurate. I’ve created a fork and updated the documentation. Hopefully this update will sometime find its way back into the parent project. The Operations Manager Documentation does not reference the shortcomings of running this tool on Kubernetes / OpenShift. You have to find out yourself and how to work around these drawbacks.

I performed the installation on an OpenShift v3.11 cluster as this will be the customer’s target platform. As the procedure is operator based I expect this also works on OpenShift v4.x. OpenShift versions earlier than 3.11 are definitely out of the game.

Start with a blank project. Either create it yourself (sufficient permissions provided) or ask your friendly cluster administrator to create it for you. We will call it mongodb.

Create a bunch of custom resource definitions (CRDs) used by the MongoDB Operator.

Next is an OpenShift special. Prepare a secret with your credentials you need to pull images from the registries registry.redhat.io and registry.connect.redhat.com. To achieve this visit https://access.redhat.com/terms-based-registry/, choose the appropriate account and download the OpenShift pull secret (to be found under the OpenShift Secret tab). This secret has one entry with key .dockerconfigjson. The value is base64 encoded. Use your favorite text editor to extract this value into a separate file. Let’s call it dockerconfig.b64. Decode the value with

The resulting file dockerconfig.json should look similar to

Don’t forget the comma between the two entries under auths!

We now create the definition of an OpenShift secret with this JSON file as value.

We assume that you store this YAML file as openshift-pull-secret.yaml. Finally create this secret with

The pod with name enterprise-operator-xxxx-yyy will fail to start due to missing permissions when pulling the image. Link the pull secret to some service accounts and restart the pod

Make sure the pod starts properly. The MongoDB Enterprise Operator is now in place. So far we have reached step 1 of the bootstrap procedure to get MongoDB up and running on OpenShift. Next is to get a usable Operations Manager.

You need another secret with the password Operations Manager uses to access its own database called appdb.

Store this in a file called opsman-db-password.yaml.

Now we create a custom resource of type MongoDBOpsManager that will trigger the MongoDB Enterprise Operator and make it install the Operations Manager.

Store this in a file called opsman-instance.yaml. For the time being we will keep things simple and omit the backup feature as it introduces a bunch of additional resources that we have to provide.

The versions of the Operations Manager and its application database seem to be more or less in sync. Have a look at Red Hat’s image catalog here and here on what’s available. I had to try a little bit to find the above combination that actually worked. For instance using the combination 4.2.4 / 4.2.3 produced the following error message in the log output of the appdb pods

followed by a very long list of available tarballs for various versions of MongoDB for various platforms. Apparently MongoDB’s own download server is not in sync with Red Hat’s container image catalog (or the other way round).

Now it’s time to create all that in OpenShift and trigger the Operator.

We intentionally use oc apply here to be able to modify the MongoDBOpsManager resource later, e.g. to add backup functionality.

Watch the installation unfold, e.g. with oc get pods -w or oc logs ops-manager-0 -f. Be patient as it might take a couple of minutes until the Operations Manager is operational.

Create a route to make the Operations Manager’s GUI accessible from the outside.

Access the GUI and log in with the credentials given with the above secret opsman-admin-credentials.yaml. You will be confronted with a first time setup of this tool. We won’t go into details.

Finally your MongoDB Operations Manager is running and usable. We have completed step 2 of the setup procedure.

Additional users might now register themselves via the Register link on the login page.

all via the Operations Manager GUI. The required elements exist and are functional. Unfortunately the resulting project will be no good in the OpenShift world. The deployment will be rejected with more or less helpful error messages. As stated in the Operator’s documentation

Unlike earlier Kubernetes Operator versions, use the Operator to create your Ops Manager project. The Operator adds additional metadata to Projects that it creates to help manage the deployments.

you have to create the organization via the GUI. The rest has to be accomplished on the command line.

So make sure you are logged into the Operations Manager GUI. Click on the very top right Operations and Organizations. Click the green Button NEW ORGANIZATION. Give a name (we choose test-orga here). On the next page you have the option to add additional users to your organization with certain roles. Click Create Organization and the organization has come into being.

(You may have realized that this white list doesn’t work anymore as soon as the Operator gets restarted, i.e. it’s run in a pod with a different IP address. You may specify the IP address range used for pods (e.g. 10.0.0.0/8). The problem is that it’s impossible for mere mortals to determine this IP address range.)

Now it’s time to create a secret and a config map in preparation of the deployment of a real MongoDB instance. The secret holds the credentials to access the Operations Manager API.

Store this in a file named test-orga-api-key.yaml.

The config map has information about the project to create (provided it doesn’t already exist), the organization where the project resides in and the URL to access the Operations Manager.

Store this in a file named test-project-config.yaml.

The last resource we have to prepare is of type MongoDB.

Store this in a file named mongodb-instance.yaml.

Pew! A hell lot of fiddling! As stated above running the Operations Manager on OpenShift is still beta and requires quite a few manual steps to get things up and running.

To connect to this replica set (from within the OpenShift cluster) you have to provide an URL with credentials and a list of all members, e.g.

Remove all files with sensitive data

The second time I left the Operations Manager GUI untouched for quite a while. In the end the deployment appeared to be (mostly) removed. A lingering server was still reported on the deployment overview page. And I was irritated by the message One or more agents are out of date on top of the page.

Nevertheless I was able to deploy another replication set and then everything was fine again.

On a more general level it has to be asked whether running MongoDB within OpenShift is actually advisable. After deploying the Operations Manager I persistently got emails with

I don’t think it is a good idea to tweak the kernel’s memory page settings of your cluster nodes just because you have MongoDB running somewhere. It might impact the performance of ordinary (i.e. non-DB) applications. Additionally if performance of your MongoDB deployments is of concern (and it probably is) then running MongoDB within your OpenShift cluster using volumes provided by some cloud storage solution is not the ideal setup. You better stick to bare metal, i.e. physical disks accessed via some hardware interface.

That said it still might be a viable option to run your Operations Manager in OpenShift dutifully managing your MongoDB installation on some physical machines.

Mind that the statement to prefer bare metal installations does not only apply to MongoDB but basically to all database-like applications.