Application monitoring in OpenShift with Prometheus and Grafana

There are a lot of articles that show how to monitor an OpenShift cluster (including the monitoring of Nodes and the underlying hardware) with Prometheus running in the same OpenShift cluster. This article however is based on a different scenario: You are responsible for an application on an OpenShift cluster and want to monitor just this application, but you don’t have any administrative permission on it. The reason for this can be that you are working in a big company where the operation of the OpenShift environment is outsourced or the process to introduce a new monitoring solution takes way too long or the current monitoring solution doesn’t match your requirements and so on.

In this article I’m going to show you how to setup the monitoring of a demo application in 6 easy steps. The example is built in that manner that it will be easy for you to do the same for your application. A side note: If the OpenShift cluster that you are using will be monitored in the future with a different Prometheus setup, you don’t need to start from scratch. You might need to tweak the configuration of your scraping a bit and you need to move your dashboard to a different Grafana but that should be it.

I assume that you have already a good idea what Prometheus, Grafana and OpenShift are and that you have access to an OpenShift cluster which allows you to download docker images from the internet. The example has been tested with OpenShift 3.7 and might not work with older OpenShift versions.

Step 1: Deploy a demo application that should be monitored

The first step will be to deploy a simple demo application. It is a SpringBoot application that provides two RESTful services (“/hello-world” and “/metrics”) and already facilitates to be monitored with Prometheus. The demo application provides metrics for the request count of the “hello-world” service as well as Java hotspot metrics. More information how to provide metrics in Java application can be found here. My colleague Dr. Fabian Stäber gave a very good talk, how to provide metrics for a Java application without modifying the source code. An article of the talk can be found here.

The following code snip it shows how the Prometheus metrics are implemented in the Restful services:

The highlighted section of the source code marks initialization of the request counter; the java hotspot metrics. The Restful service “/metrics” returns the metrics of the demo application.

The deployment of the demo application is done with this command:

If you can see these links and they show similar results if you click on the links then you have successfully deployed the application.

In the next step you either deploy Prometheus with the role “system:auth-delegator” for the service account with the following command:

or without the role by the command:

After this you should be able to login to Prometheus with your OpenShift account and see the following screen if you click on “Status->Targets”.

So far we only see that Prometheus is scraping pods and services in the project “prometheus”. No worries, we are going to change that in step 4.

The next step is to install Grafana. For this we first create a new project “grafana” with the command:

Now we are going to deploy Grafana with the command:

Next we need to grant the Grafana service account view access to the project “prometheus” with the following command, so that Grafana can display data from Prometheus:

After this step you need to open Grafana in a browser. Here we need to create a data source for Prometheus. In order to do that, click on “Add data source”. You should see the following screen: 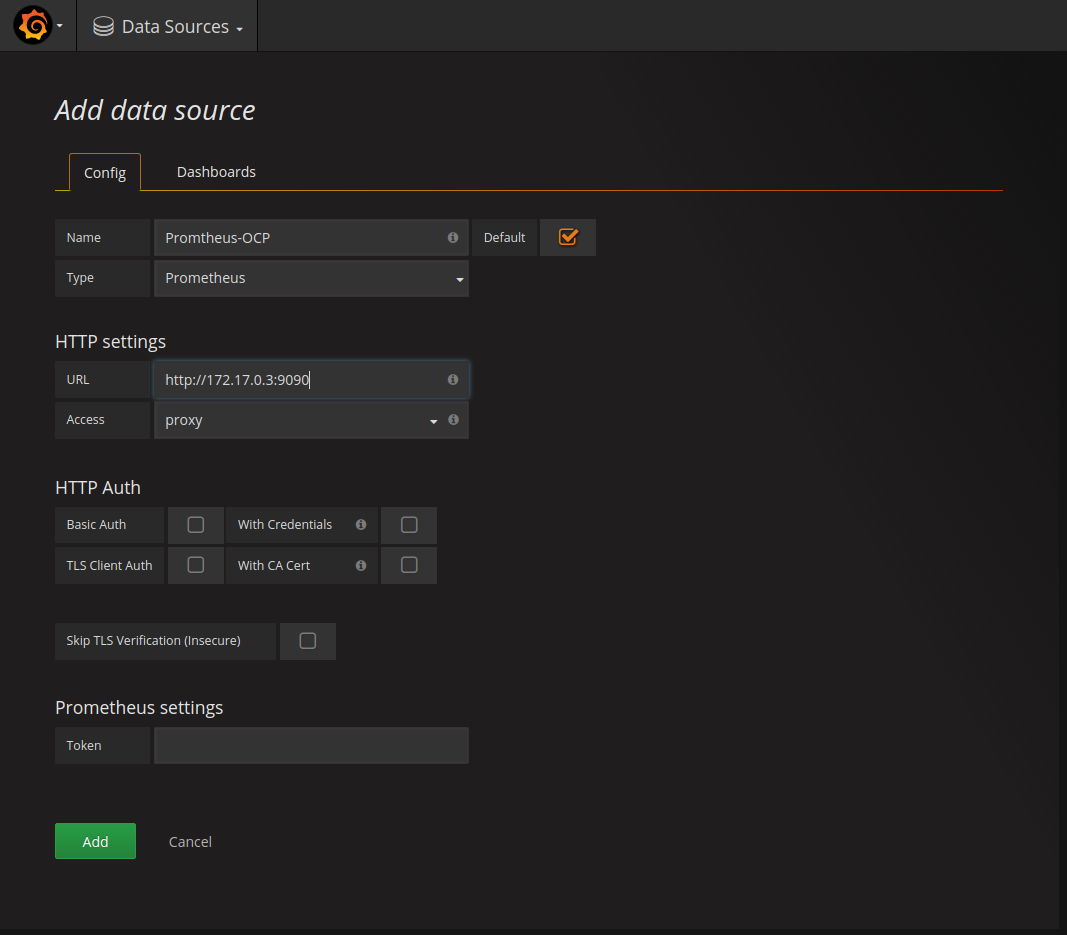 You need to take the highlighted IP-Address:

If you press Add (later called Save & Test) the result should look like this: 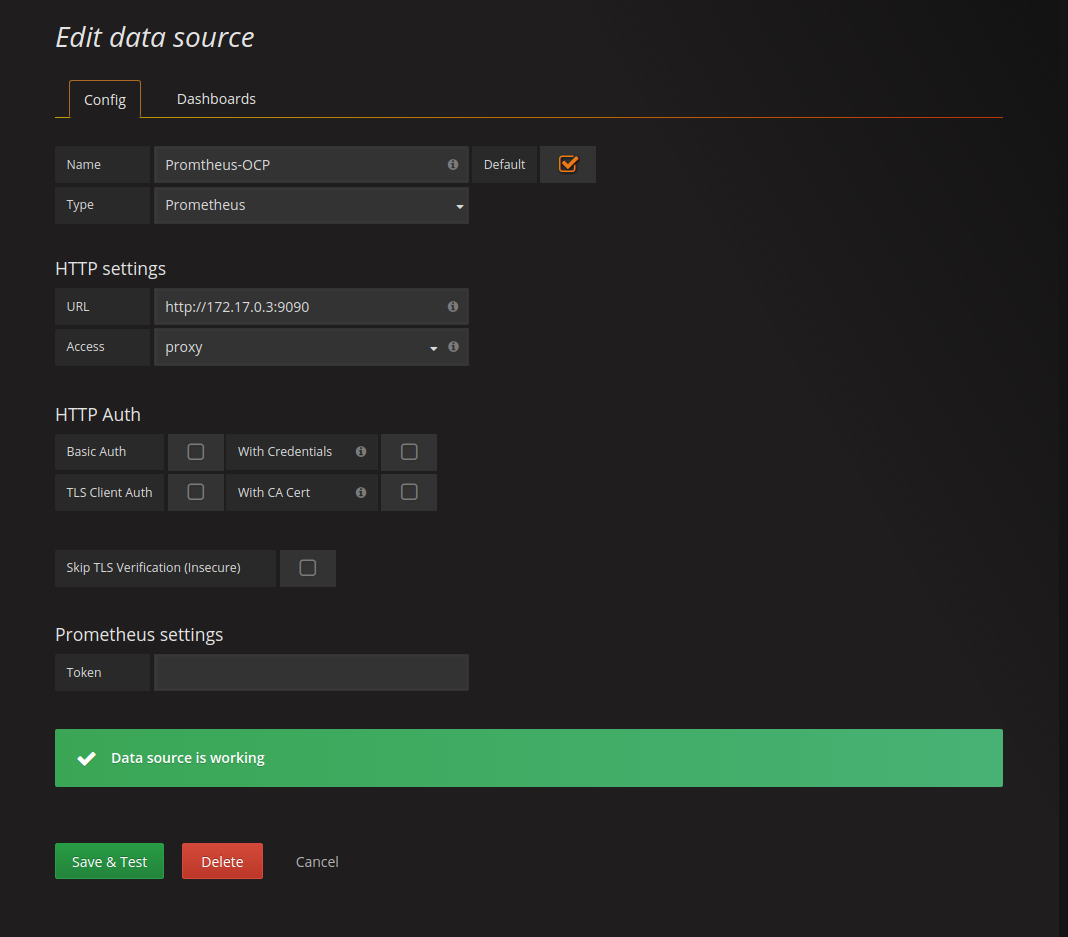 Further more you need to check the check box “Skip TLS Verification (Insecure)” and get the token for the service account grafana-ocp with this command:

If you press save the result should look like this: 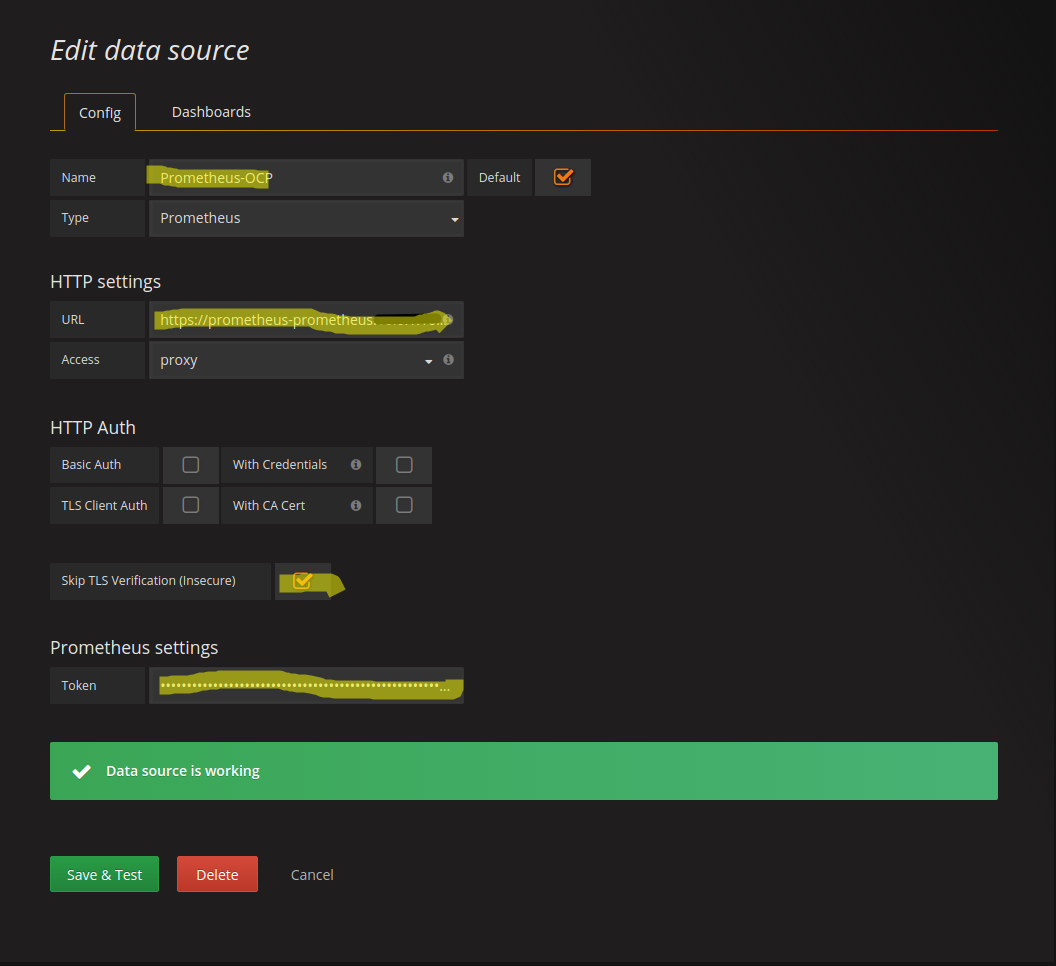 Step 4: Update configuration of Prometheus to scrape the demo application

Step 5: Update the deployment configuration of the demo application to allow Prometheus monitoring

For a production environment it is not a good idea just to kill Prometheus in order to reload the configuration, because you interrupt the monitoring. There is an alternative way, for this you need to submit an empty POST to Prometheus URL with the suffix “-/reload”. The problem here is that with our OpenShift you can’t just submit a POST directly to the Prometheus server, because of the OAuth authentication. Luckily we are able to execute the command within the prometheus pod itself with the following OpenShift CLI command

After executing this command and some time you should see on the “Status->Targets” the pods and the services of the demo application. In case you don’t see the services as “Up” you might need to hit refresh a couple of times in the browser.

Scrap configuration of pods and services

If you want to scrap all pods respectivly services unless the specifed otherwise in the service or pod (out-out) you need to modify the configuration to this:

For our example we use the opt-in configuration. In case your are wondering, the template of the “demoapplication” already contains the setting for scrapping the pods and the service. For the pod’s the configuration looks like this:

With these configurations the pods and services are not only enabled for scrapping, furthermore the port, path and the scheme (http/https) for the metrics can be overwritten. In our case the used port of the demo application is 8080 instead of the default port 80.

The only part that is missing is to display the collected metrics of the demo application in Grafana. Like in every cooking show on TV, I have already prepared something. In our scenario you just need to import a dashboard to see some metrics. For this, you need first to download this (Grafana dashboard template)[https://raw.githubusercontent.com/ConSol/springboot-monitoring-example/master/templates/grafana_dashboard_template.json] file. In order to use the template, select in the browser with the Grafana the Grafana-Logo (upper left)->Dashboards->Import. 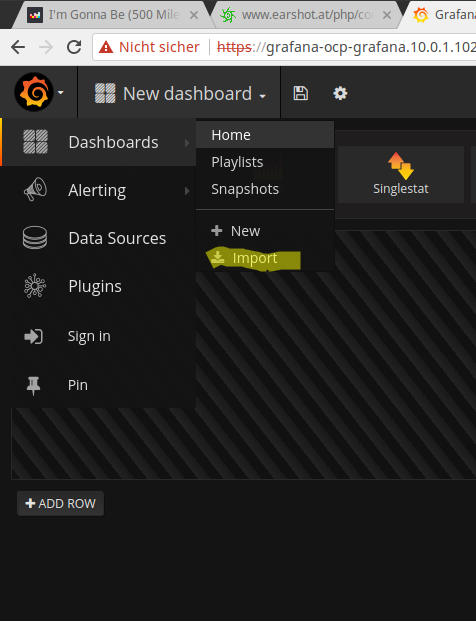 In the next screen upload the Grafana dashboard template file. The following screen should look like this:

Here you define the name of the Grafana dashboard and the data source. Please select the data source that you have defined above for Prometheus. After this click the button “Import” and you should see something like this:

In order to get some metrics you call the service “hello-world” of the demo application a couple of times either in the browser or by executing the following command:

Congratulation! You have now installed Prometheus and Grafana on your OpenShift cluster. Furthermore, you have installed a demo application and gathered metrics of it.

This article showed you how to deploy Prometheus and Grafana on an OpenShift Cluster without admin permissions. Also it described how to configure Prometheus to collect metrics of an application in a different project. Lastly it showed how to display these metrics in Grafana. This article is only the starting point on the monitoring of applications in OpenShift with Prometheus. The next steps could be to attach persistent volumes to Prometheus and Grafana to store the configuration and other data, extend the monitoring, add alerts, define an archiving of metrics, clustering of Prometheus and so.

The templates that are used to deploy Prometheus and Grafana are based on templates of these websites:
* OpenShift Origin Prometheus template
* Grafana on OpenShift by Eldad Marciano