Infinispan is included in the JBoss AS 7 distribution as the default second level cache for Hibernate.
For my presentation on the JBoss One Day Talk 2013,
I was looking for the most simple example to be used in a demo.
This post shows how to get Infinispan Hibernate 2nd Level Caching up and running in five minutes.
It should also work with the upcoming WildFly Application Server.

JBoss have prepared a maven archetype that can be used to create a simple JEE web application.
We use this application as a a starting point:

The generated application has the JBoss AS 7 Maven Plugin included in its pom.xml, and can be run from the command line as follows:

This will download and run the JBoss Application Server and deploy the example application. The application will become available on http://localhost:8080/infinispan-jpa-example. 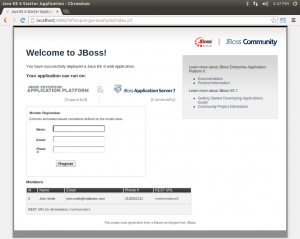 The application maintains a list of Members in an SQL database. Each member has the following attributes:

In order to see the effect of the L2 caching, we need to enable logging on the database level to see the SQL queries performed.

As we know that JBoss uses H2 as its default database, we can add an H2 specific command to import.sql in order to enable logging of SQL commands on the database level:

When the application is re-started, we can now observe in the console output that each request to http://localhost:8080/infinispan-jpa-example/rest/members/0 triggers an SQL query on the database.

To enable Infinispan as a 2nd Level Cache for JPA applications, two lines need to be added to persistence.xml. First, directly after the jta-data-source and before the properties, the shared-cache-mode needs to be set:

Secondly, an additional property must be added to the properties list:

The shared cache mode DISABLE_SELECTIVE means that all JPA entities are cached unless caching is explicitly disabled via annotations. That way, all the Member entities in the example application become subject to caching.

After restarting the application, we can see in the console output that only the first access to the REST interface http://localhost:8080/infinispan-jpa-example/rest/members/0 triggers a query on the database level, all subsequent queries are served from the cache.

Where to go from here

This post showed how to get Infinispan up and running as a 2nd level Hibernate cache in a simple JPA application. The next steps would be to: